In the Spring of 2019, I learned about a new hoof testing device called the KrossCheck Leverage System. My good barrel horse came up crippled after our first run of the year. To say I was devastated would be an understatement. I was in Oklahoma at the Barrel Bash — prepping for the BBR World Finals. I had two younger horses with me, and I was ready to take them to all the practice runs I planned to make while I was down South. Instead I ended up going nowhere fast.

Here’s how the trip unfolded.

I made a smooth, easy run on Friday evening. It was our first outing of the year, and I was stoked. Saturday morning I pulled my horse out of his stall, removed all his Back on Track gear, threw a leg over him and instantly, I knew something was wrong. I called my friend in Texas, whose place I was going to be staying and she got me hooked up with her vet for a Monday Appointment. We left Guthrie, Oklahoma, Sunday morning and headed for the Lone Star State.

Initially, the vet thought maybe it was a simple hoof abscess. Yet, four days later there was no improvement. Nerve blocks didn’t seem to resolve the issue. Next up was an x-ray. The radiographs showed fractured side bones, and low ringbone. The vet in Texas, wanted to inject the coffin joint, and place my horse in a bar shoe.

The last horse I had injected got an infection in her stifle joint from that injection. We had to put her down after watching her fight that infection for many years. I may have shed a tear or two when the vet said, “really, your only option is to inject him”. Panic set in.

Avie was already getting daily Equoixx and monthly Adequan shots. I was trying to help him be the best he could be. But that wasn’t enough in this case and I was heartbroken that I’d let my partner down.

For the sake of continuity, I decided to take Avie back home to South Dakota to my vet here, and let him manage his conditions. We really weren’t even sure he’d ever be sound again based on the diagnosis. Cue more devastation, more tears, more hopelessness.

I’d sent the radiographs taken in Texas, to my vet. A week later, upon arrival to the clinic, my vet said, “Yes, you’ve got fractured side bones. Yes, you’ve got low ringbone. But you know what else we have going on in here? Navicular. And I’m frankly more concerned about that than I am the fractures. They’re old. The ringbone can be mangaged.”

Holy Distal Limb issues, Batman! By this time I was really freaking out. The vet wasn’t sure that even injecting his coffin joints would help. But I agreed to go with his protocol. Here is his movement before we implemented the protocol.

Below you’ll read about how we helped an unsound horse come back to performing better than ever!

The first step was to inject the coffin joints. Then, we gave an osphos shot to slow down the navicular changes. Doc wanted to see him back in a week to see where we were soundness wise.

We were not sound. The right front was probably 99% and on the left front he was not that close. Doc told me that was as good as it was going to get, and to have his shoes reset, and see how much that helped.

At the beginning of this saga, I immediatey started, searching for a shoer that could help my horse. When I found this little video series, I knew I had to find someone that could use a KrossCheck Leverage Device. That led me to a farrier in Minnesota. I’m so thankful for him.

In this video, you’ll learn all about the system.

Through a quick google search of Gene Ovenick’s name (He shoes for Christy Hefley), I found the Equine Lameness Prevention Organization, or ELPO.

After my new farrier went through the process of mapping the feet, Avie was the proud owner of some fancy new PLR shoes, made just for him. And you know what? When he finished, I had a sound horse. Avie prefers the leverage to be on the inside of his foot, so we grind down the shoe on the outside, such that the leverage point is on the inside. He’s shod like that, all the way around.

I’m so grateful we’ve got the means to help my horse, the means to drive to Minnesota to the farrier, and a team at home behind me, supporting us.

If you have a lame horse, I’d highly recommend finding someone who can properly utilize the KrossCheck Leverage system. It changed my horse’s life and I know it can help your horse as well.

This entire experience has led me down a road I thought I’d never take. Stay tuned to learn more about what it’s taught me, where we are now, and how I am certain we can bring most of our talented athletes back to tip-top shape. 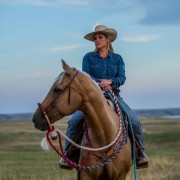